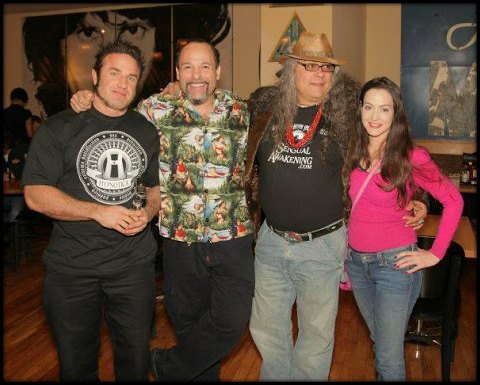 As you may know, I was in Vegas last weekend for Johnny Soporno’s bootcamp, and among Johnny Soporno had special guests who are two of the most well-known figures in the so-called seduction community: Hypnotica and Steve Piccus.

Steve Piccus turns out to be an absolutely adorable man.  Steve Piccus has explored some of the Native American mystical traditions and is as free-spirited as they come. He actually reminds me very much of two of my uncles on my father’s side of the family. Steve P. is so blunt and so funny and comes up out of nowhere with these great lines. For example, he was talking about how relationships between a man and a woman often die, and as he put it … “Before you know it, you’ve gone from soulmates to cellmates.” Lol :)

In all, nine of us participated in the three-hour(!) healing session. We were in a hotel suite, in the living room, and Marci was nude on a massage table. There were seven guys, Marci, and me. Steve P. led the session, giving continuing instructions. I stayed at Marci’s head, gently touching her hair and neck and delivering Reiki energy to her.

This is what happened when we experienced Steve Piccus and White Tiger Tantra:

First, the seven guys, all working together, gave Marci the deepest tissue massage you can imagine. With hands washed all the way up to the elbows, the guys doused themselves in grapeseed oil and massaged literally every part of Marci’s body. Steve showed the guys how to target certain acupuncture meridians that correspond to various emotions and organs of the body. The guys kept massaging until every muscle in Marci’s body had become smooth and relaxed. Even with seven guys working, it took at least TWO HOURS!!

Second, once Marci was really ready and completely relaxed, Steve P. showed the guys how to use their fingers inside her to bring her to orgasm. She came at least three times, and the final climax was what Steve Piccus calls a “teargasm.” Marci was actually crying. Then one of the guys in the room just held her for a while. This was a massive emotional release for Marci and provided tremendous sexual healing with White Tiger Tantra.

The Aftermath of Steve Piccus and White Tiger Tantra

This whole time I was feeling pretty useless, but one of the guys told me (and Marci later confirmed) that she actually did much better during the session while I was delivering the Reiki energy to her head. This sort of deep tissue massage can be very painful at times, and the Reiki apparently grounded her. So I was happy to know that my being there had a life-serving purpose :)

After the sexual healing White Tiger Tantra session guided by Steve Piccus, I felt really inspired and very glad to have participated. As my blog readers know, I have spent a lot of time trying to merge and reconcile sexuality and spirituality. This session showed me that the two things really can come together. The atmosphere in the room was one of love, healing, and non-judgment, which is pretty amazing, if you imagine a scenario with a naked woman and seven men in a room. It felt very very sacred. I hope one day to experience it on the receiving end because I’m sure it would be very sexual healing for me as well.

If you liked this article you may enjoy:

How to Attract Women – The Ultimate Guide

← Johnny Soporno’s Model of Polyamory and Open Relationships ← Seduction Community Synchronicities :-)
We use cookies on this website. By continuing to use this site, you are consenting to cookies. We do not sell user or customer information, ever.Ok