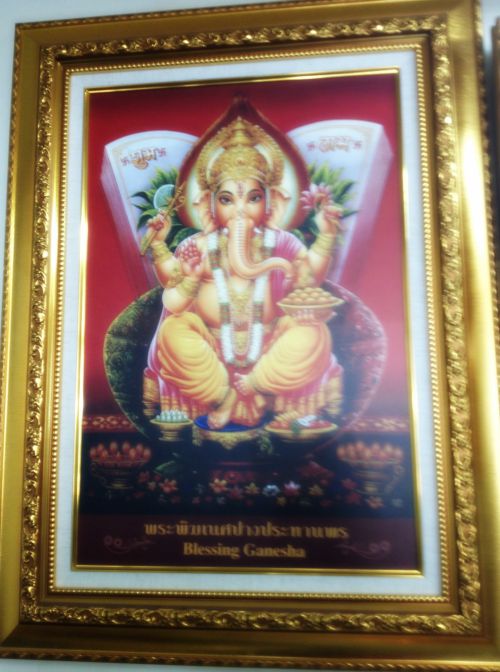 Among many other energies that I am working toward balancing in the healing of Harvey the Cat’s heart … is sibling rivalry. For the most part, Fritz the Cat has been very patient and sweet as the vast majority of my attention has gone to his adopted brother Harvey. Yet there have also been moments when he has attacked Harvey the Cat out of jealousy and anger. So what do we do to heal this pattern?

On this Day 10 of 111 Days of Love, we delve into healing with archetypes.

Healing with archetypes – this is a concept that will be familiar to those of you who have been using my 30-Day Challenges for years now. In the original 30-Day Abundance Challenge, some of the most popular videos are the Lakshmi and Ganesh videos. We invoke the power of Lakshmi and Ganesh within us to manifest abundance and remove obstacles. This is an example of healing with archetypes.

When I was in Thailand in 2013, this image of Ganesh appeared on the wall of the store that gave me visa photos to go to Vietnam. The removal of obstacles was exactly what was happening at that moment.

If, as we have talked about in recent articles, we are listening to the messages of the Universe via synchronicity … then we will know through intuition and clues in our environment which archetypes we need to invoke for healing.

I am about to launch some brand new coaching options at introductory prices. This will provide an opportunity for those who missed out on my early coaching prices to experience the magic of intuitive healing at lower prices than full-on Holistic Belief Reprogramming sessions.

One of the new coaching options is distance healing. We already had our first sign up for distance healing. It was a mother healing issue and involved feelings of not good enough and comparing oneself to others.

When I first began to tap for this distance healing, I suddenly felt an intense pain in my neck on the left side. It got stuck there in the initial healing. So I decided to come back and address it again.

No sooner had I sat down in my tapping chair and begun to tune in to this pain in the left neck when … I heard Fritz the Cat making a very strange sound and emerging from my bedroom. I felt terrified, as we have been in such crisis with Harvey the Cat for months now.

I stopped tapping and walked into the bedroom, where I found my bed covered with liquid. My sheets are dark red, so at first I felt scared it was blood. Harvey the Cat had been on my bed and was no longer there. I began the emergency protocol immediately. I felt terrified he had experienced another blood clot and lost his bladder.

I felt some relief when I discovered that the liquid on my bed was clear and smelled like urine. After some more emergency protocol, I mustered the courage to look under the bed. Harvey the Cat was there, and looked scared but otherwise okay.

As best I could tell, Fritz the Cat must have jumped on the bed and literally scared the piss out of Harvey the Cat. I felt angry. Why was Fritz being such a jerk when Harvey needs to heal?

And as I continued tapping and tuning in to the anger … it came to me. Cain and Abel. Cain furious because Abel received God’s favor. Fritz the Cat furious because Harvey’s health situation led him to get so much attention … and food.

This was the clarion call of Intuition telling me where to go next with the tapping and the distance healing.

So since that moment, I have been working on Biblical archetypes of Cain and Abel, Adam and Eve. It is my hope that this will ease the feelings of “not good enough,” the shame, and the jealousy, and the anger.

(We also do lots of healing with archetypes in my 30-Day Sexual Abundance Challenge. Get it now – price is going up shortly!)

It doesn’t matter whether we are Christian or Hindu or Buddhist or not … the archetypes from all religions and cultures are programmed into our subconscious minds. And if we do not reprogram these unconscious programs, they continue to run our lives outside of conscious awareness.

That is why healing with the archetypes is so important to setting ourselves free.

← The Holy Instant ← How Cultivating Gratitude Brings You More of Everything Good
We use cookies on this website. By continuing to use this site, you are consenting to cookies. We do not sell user or customer information, ever.Ok