Lifting the Limits on Healing Fritz the Cat’s Kidneys 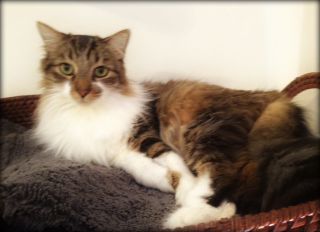 Fritz the Cat in his favorite basket on high, after recovering from seemingly hopeless kidney failure.

Day 12 is a special day of celebration of healing in 111 Days of Love. This is because September 17, 2015 is the three-year anniversary of the day that Fritz the Cat got extremely sick with kidney failure in 2012.

While Fritz the Cat was in the hospital for four days on IV fluids, I was told over and over again by the veterinarian that he could not recover fully because “kidney cells do not regenerate.” This belief was confirmed by my independent online research.

This veterinarian had, of course, treated many cats with kidney failure. Her experience was that, if the kidney failure did not respond within the 48 hours to IV fluids, the prognosis was bleak. She said we were aiming to get down to at least 4.2 on his creatinine after 48 hours on fluids. If we could get to 4.2, he would have a decent chance of some recovery.

So it was not good news when … After 48 hours on IV fluids, Fritz the Cat’s creatinine levels had barely budged. The top of the normal range is 2.2. When admitted, his number was higher than 13 – sky high. After 48 hours on fluids, his creatinine level was still higher than 10. Things were looking very bleak indeed. The veterinarian said to me, “These numbers are not consistent with him living.”

And I said, simply, “I believe in miracles.” 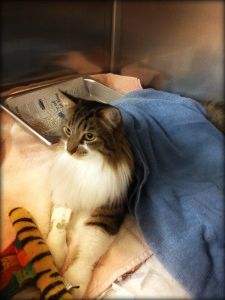 It was upon receiving this devastating news about his barely-improved lab results that desperation drove me to discover the emergency protocol that I talked about recently in this article. I was so bereft, it felt like my entirely being was collapsing. In desperation, I simply took the Table of Contents from the A Course in Miracles Workbook and started tapping through it, line by line, over and over again.

I simply could not square my study of A Course in Miracles since 2007 with this tragic outcome of Fritz the Cat’s life cut short.

There had to be a miracle in here somewhere. And I was going to find my way out of this dark hole to see it.

Well, fast forward to when I went to pick up Fritz the Cat two days later. I fully expected to take him home in a debilitated state, administer subcutaneous fluids as best I could, continue tapping for him, and help him have the best life possible for whatever days, weeks, or months we might have left.

I told the veterinarian that I didn’t want to know the test results. I was scared that hearing any more bad news would only make it more difficult for me to care for him as best I could.

“Are you sure you don’t want to hear the results?” she asked.

I almost could not believe my ears, though as we will talk about on the blog soon, we had a similar moment of Grace with Harvey the Cat.

It turned out that, after I started using the emergency protocol, his test results dropped dramatically. He was down to 4.3, almost where we wanted him to be two days earlier.

After we got home, I continued tapping. I took all that medical literature – and everything I could find online – and I kept applying my Holistic Belief Reprogramming method and the emergency protocol to every limiting belief I could uncover.

At that time, three years ago, everyone I talked to or read about online agreed that kidney cells cannot regenerate. This is why kidney damage was believed to be irreversible and incurable.

No matter, I envisioned his kidney cells regenerating anyway. And I tapped my heart out for months.

Well, a couple of weeks later, Fritz the Cat did the “impossible.” He tested back in normal ranges for kidney function. And when he was tested several months later, and again a year after the initial incident, his test results continued to look good.

Because now, scientists have proved that in fact kidney cells CAN REGENERATE.

Of course, nobody should be surprised by this. With God, all things are possible. However, this new “reality” was not accessible three years ago when Fritz the Cat got sick.

This new reality became accessible through applying Holistic Belief Reprogramming to the issue of kidney failure.

← How Cultivating Gratitude Brings You More of Everything Good ← Why Cain and Abel Are Still Fucking Up Your Life
We use cookies on this website. By continuing to use this site, you are consenting to cookies. We do not sell user or customer information, ever.Ok