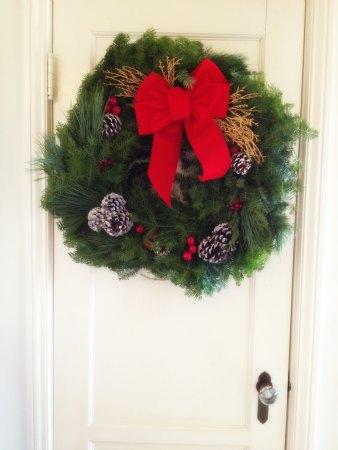 Here is my Christmas miracle wreath

When we are walking deep in the unknown, as we are now, it feels good when the Angels remind us we are not alone.

Right now I am feeling a lot of fear. This year was very intense, with Harvey the Cat’s ongoing healing. The rest of his hospital bill, along with a huge bunch of other bills, is due in January.

I really wanted a pretty Christmas wreath to decorate our home and bring in the scent of the outdoors. I grew up in Oregon with deep woods behind our house. I love the smell of evergreens.

I was reminded of this when I walked to drop off my rent check yesterday. One of the buildings had huge fir trees in the lobby, all dressed up with ribbons and ornaments and lights. What I noticed most though was the refreshing scent of fir needles. I leaned in close to inhale deeply. Ahhh …

Over the past few weeks, I had seen many beautiful Christmas wreaths in catalogs … for anywhere from $70 to $150 plus shipping. But it was a little like when I wanted a new car in the summer of 2011. I wanted the car, but I did not see where the money was going to come from … It feels scary to spend money on something “frivolous” like a beautifully decorated wreath when I have $25,000 in non-negotiable bills due in the next couple of months … so I waited. 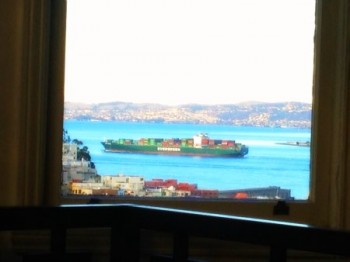 I first spotted the name Evergreen on the freight ships that traverse San Francisco Bay … when I was tapping about Harvey the Cat. I took it as a sign from the Angels about his eternal health and life :)

I did actually tap about it. In one of the recent videos that I recorded. And a few seconds later, the Evergreen boat appeared in my field of vision :)

Well, I intended to sleep late this morning. I have not been getting a lot of sleep, what with feeding Harvey the Cat twice in the middle of each night, because that is when he eats best. Funny thing about nocturnal animals.

Yet something got me out of bed early. I felt surprised to see that I was already making coffee as it barely turned to 8:00 a.m.

Coffee has become a very important part of my day. I began drinking so much more of it during our summer crisis with Harvey, because I was getting very, very little sleep. And now it’s one of the few comfort rituals that I have.

I noticed that the trash was looking full. Well, it looked more heavy than full. With the huge amount of urine output from my cats these days, I am careful that the trash does not get too full or it’s so heavy that it’s hard for me to carry downstairs. Little known fact … Clumping cat litter is very heavy once it’s soaked with urine. The trash bins are on the second floor of the building.

I grabbed the handle ties of the trash bag. Sure enough, it felt really heavy. It was time to take it downstairs. I rode the elevator down, intending to walk the stairs back up to my apartment. Over the summer, as I was not getting out much at all … I took to climbing the six to eight flights of stairs as often as possible … otherwise, my life was becoming absolutely sedentary.

When I arrived at the huge trash bin, I lifted the cover and barely managed to twist and heave the bag over the high edge and safely into the deep well of the bin. Plop, swish.

Mission accomplished, I turned on my heels to go back upstairs. On the way to the stairs going up, there is a black set of lockers in the hallway. For years now, this has been a place where people in the building leave their unwanted stuff for others to take if they like. I had recently put a couple of cat scratching posts and some cat food on top of that file cabinet. If I can’t use it, maybe someone else can.

And there I saw a plain cardboard box. Normally I would walk right by. Instead, intuition told me to open the box. I lifted the flap. The box had not even been fully opened before its owner discarded it. Only one flap was pried open.

But as I looked more closely, this wreath looked beautiful. Generously sized. Adorned just the way I like it with a red ribbon, frosted pine cones, and red berries. And … ahhh … that scent of evergreen wafting into my nose.

This is clearly for me, I thought. Thank you, Angels.

We use cookies on this website. By continuing to use this site, you are consenting to cookies. We do not sell user or customer information, ever.Ok