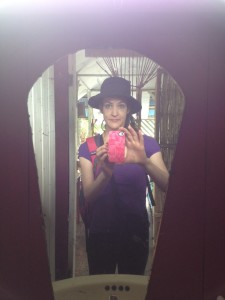 In the shuttle ride from our hotel to the small village of Puerto Viejo de Talamanca on the Caribbean Coast of Costa Rica, I was riding with two couples. I don’t even know how the conversation started. The key to letting go of social anxiety and having no fear of meeting new people is to see everyone else as “just like me.” As A Course in Miracles teaches,

“He sees no strangers; only dearly loved and loving friends.”

Everyone everywhere, regardless of age, culture, nationality, or language, is a potential friend. If you need help with overcoming social anxiety and adopting this mindset that “everyone is my friend,” it’s as good a time as any to sign up for personal coaching sessions (learn more here).

Situational openers that are taught in the pickup community are fantastic for traveling alone. So many great topics to choose from … talk about the hotel, talk about the day’s activities, talk about where you are from in the world, and ask them about all the same things … easy, conversation has begun. Like surfing, socializing is 90 percent inner game and mindset. Expect people to be friendly and open, and they will be.

Yes, that used to be me. I have traveled internationally quite a few times before but never alone until now. In fact, I would intentionally postpone trips and even get into relationships that I was not sure I really wanted to be in … just to have a travel companion. Yikes! At the time, I did not realize how much this fear was holding me back. It was only after several years of living much more solo that I discovered that the “need” for company is not really a need. If you enjoy your own process and you like yourself, you don’t “need” anyone for life to be enjoyable or complete. And then you are free to enter into relationships in a non-codependent way without undue pressure on anyone.

After asking them a few questions, I learned at least part of the reason that these women are scared of traveling alone. They watch too much television. They literally are terrified of nameless attackers or even of their taxi driver killing them. I am not kidding.

So much of television is all about fear. You learn how to be scared of people and scared of animals and scared of the natural world. I urge you to STOP watching it. Not only because it is filling you with needless fear, but also because it consumes endless amounts of time when you could be out there LIVING YOUR LIFE. I do not watch television, and I have spent years now releasing the fears that built up inside me from engaging in “news” and popular culture and having my own traumatic experiences. So now traveling solo does not feel scary. It feels like freedom :)

“I am in danger nowhere in the world.” – A Course in Miracles 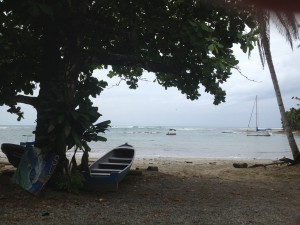 After the shuttle dropped us off, I spent my day exploring the quaint little town of Puerto Viejo de Talamanca on the Caribbean coast of Costa Rica. This is a Jamaican-influenced part of the country with a lot of reggae culture. I love it, absolutely fell in love with this little town. As I walked around, it turned out many people did not know any or much English. Which was wonderful. Spanish began to come back to me in leaps and bounds :)

Quickly, I found Hershel the surfing instructor and arranged to take a lesson from him at 12:30 pm (read more and see photos here). While waiting for his arrival, I felt like having some nourishment, I felt drawn to Veronica’s Vegetarian restaurant in town. On my first visit, before my surfing lesson, I got out of my comfort zone by ordering something I never had before – an aloe vera and noni smoothie (photo to the right). Noni is the exotic and ill-smelling fruit that Roland and Alejandro showed me on our drive from the airport (read more here). It was quite tasty. The man who served me told me that my surfing instructor Hershel was the son of the owner Veronica.

After my surfing lesson, I returned to Veronica’s on intuition and ordered another smoothie. This time Veronica was there.

I asked her, “Es la madre de Hershel?” (Are you Hershel’s mother?) She smiled big, and said “Si, si.” And we got into a delightful little conversation in part English and part Spanish. The second smoothie of mango, banana, and starfruit was equally delicious. But here’s the kicker. When I got home to the hotel later in the evening, I was told that most of the guests at Samasati Nature Lodge get sick when they eat in town because of the minerals in the water. I noted that I did not feel sick at all. When this person learned that I ate at Veronica’s, she told me that is the ONLY restaurant in town that gets the thumbs up from Samasati because the water IS purified. But you see … I didn’t know that before I chose that restaurant. This is where your INTUITION – when very honed – will help to protect you while traveling. Deep down you already know where you need to go and what you need to do to travel safely. If you need help listening to and trusting your intuition, get my 30-Day Powerful Intuition Challenge.

So back to the hotel and overcoming fear of traveling alone and meeting new people. My first night at Samasati, I ate alone at my own table. Now, this was not uncomfortable for me. At one time in my life, I would have worried what others might think of me, but I’m so past that now. The second night, though, guess what happened? :)

One of the women I met in the shuttle earlier that morning (see above) invited me to her table with her husband. Then when I was telling my near-death story, the other woman I met earlier also wanted to hear it and pulled up their table. In about 5 minutes I went from eating alone to a gregarious table of five, just like that. It was clearly meant to be, because one of the women had a heart attack at the tender age of 36 and is interested in learning about holistic healing. So we had a LOT to talk about, and it was fun sharing our stories of near death and healing :)

So there you go … the Easy Key to Overcoming Fear of Traveling Alone and Making New Friends … First feel comfortable in your own skin and be okay with being alone. Second, remember the key to seamless socializing … Expect everyone to be your friend, and they will be. Your beliefs about them are really all that matter. It’s 90 percent inner game.

By the way, Day 4 of the brand new 30-Day Becoming Fearless Challenge that I am recording here covers “Letting Go of Fear of Meeting New People and Traveling Alone.” Shortly after recording it, I took the initiative to unite our entire hotel for dinner (read more and see the photo here).

In the next post about becoming fearless in Costa Rica, I will share with you about Yoga and Healthy Living at Samasati Nature Retreat in Costa Rica. Getting out of my comfort zone by waking up at the crack of dawn to practice yoga with my new friend (with photos of me doing yoga in the beautiful yurt in the jungle).

Get the 30-Day Becoming Fearless Challenge now … 30 powerful EFT tapping videos for releasing every kind of fear, including social fears, physical fears, sexual fears, fears of being vulnerable, and the list goes on and on … :) Get it now HERE.

← Are You In A Rut? Get Out Rut Now ← Becoming Fearless Underwater
We use cookies on this website. By continuing to use this site, you are consenting to cookies. We do not sell user or customer information, ever.Ok