The Art of Disappearing Bullies and Nuisances

The Art of Disappearing Bullies and Nuisances 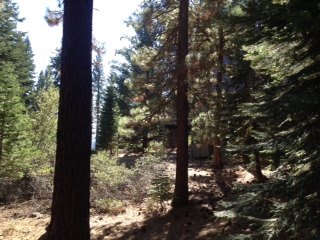 My peaceful yard with the nuisance magically removed by God :)

Last night before I fell asleep, I prayed. I asked for miracles. Recently, there have been a few problems that I have not managed to solve by myself. Although it was not foremost in my mind last night, one of those problems was the neighbor’s truck.

When I come to Tahoe, I am looking for peace. Peace means quiet, simplicity, and beauty. I’m living in the woods. I’m surrounded by the sights and sounds and smells of gorgeous Nature.

And then there was the truck.

A little back story here … I had been living with the neighbor’s woodpile for years, until I finally got up the nerve this spring to ask my dad to do something about it. Our neighbors are truly wonderful people. Wonderful, gracious, cooperative people. You could not wish for better neighbors.

This woodpile, on the other hand, was not wonderful. It was strewn with garbage bags and might have been harboring a massive ant nest. Finally, I could not take it any longer. So my dad gently talked to them about it, we got permission to move the woodpile. Problem solved. What a relief.

So my heart sank when I arrived here a few weeks ago to see this horrendous old jalopy in their front yard. To say it was an eyesore would be an understatement. It dominated the landscape with its rusted-out paint job and bright white clashing with the natural surroundings. A huge rust spot seemed to dominate one of my front windows.

You can see it as a symbol. It wasn’t just about a truck. Sure, they had left a rusted out, beat-to-hell pickup out in their yard in plain view of my windows. But the symbolism went deeper. As the days rolled by, and nobody came to move the pickup … it began to be a splinter in my mind. I was thinking about it even when I wasn’t looking at it. Much the way we all do with the bullies and nuisances in our lives.

As A Course in Miracles says, “There are no small upsets. They are all equally disturbing to my peace of mind.”

This rusted-out, junker pickup was just like the other unresolved problems in my life. It was bothering me all the time. I was debating in my mind how I was going to deal with it. Should I send an email? What should I say? I did not want to offend the neighbors, as they have been really wonderful people. They have helped us out when we needed help. They have even invited me for dinner and have always worked things out with us amicably.

Still, this horrendous truck right next to my front window felt incredibly awkward. At first I hoped it was just a two-day thing. No such luck. Two weeks went by, and still no signs of life at the house. Every day I looked out hoping it would be gone, and every day, that rusted out, beat-up eyesore of a pickup was still there. Surely they could have just left it in the garage. Surely someone would understand it was an eyesore and remove it. Surely they didn’t plan to leave the truck there PERMANENTLY!

Good God, would this turn out to be like the woodpile? Would I be looking at this nuisance for YEARS?

As we rolled into my third week of looking at that God awful pickup truck, something shifted in me. I was no longer willing to be upset about the pickup truck. I had been creating EFT tapping videos to release my emotions. I had no plan for what I might say to the neighbors, diplomatically, to get them to remove it. I just kind of … accepted the pickup truck while not accepting the pickup truck at the same time. I resolved not to let it ruin my enjoyment of the peace and quiet here, regardless.

My dad had some great suggestions about what one might say in this situation. “Wow, that’s a great looking pickup truck. I sure wouldn’t want it to get rusted sitting outside like that.” And so forth … lol ;)

The pickup truck is a symbol for all those things in life that drive us mad … that we are feeling powerless to do anything to change.

So last night I went to sleep asking for miracles to bring these problems to an end. When I woke up this morning, it seemed like any other day. Except it wasn’t.

My dad was about to leave for Oregon. He fixed light bulbs for me. He left me fresh macaroons and pomegranates and Asian pears and homemade wheat bread.

And he came in all excited to tell me: “Erika, the neighbor’s cousin came by this morning. He knows it’s an eyesore!”

“Wow, really?” I was still wiping sleep from my eyes.

“He jumped the truck and is moving it this afternoon.”

“No way!” I started laughing. And sure enough the truck had already been moved to a new location, where it was harder to see behind all the bushes and trees.

In the afternoon, I was creating an EFT tapping video about this whole experience. And sure enough, while recording the video, I heard a loud sound outside. The cousin had returned! I was actually able to see the truck drive away from where I was sitting in the loft, recording the video. It’s all on camera lol :)

Now, what I forgot to mention is that I also woke up this morning to two rental inquiries when I had not received any in a while … It felt like God was saying, “My Child, I have not abandoned you. The best is yet to come.”

And as I celebrated the departure of the pickup truck today, I thought back to all the other times that I have managed to disappear bullies and nuisances with the power of my mind … Let me count the ways God has delivered me with the power of EFT tapping:

1. Ousting an entire corrupt regime. In what feels like a lifetime ago, I had a job once upon a time where the leadership was extremely abusive. It was a nightmare working there. People were manipulative, power hungry, abusive, backstabbing, and worse. I started tapping on every trigger as it arose. As I did so, an entire regime was ousted and a much gentler era ensued. The bullies simply DISAPPEARED. They were rendered into oblivion.

2. The disappearing of Squidoo. Somewhat over two years ago, I wrote an article about the abusive behavior going on at Squidoo. Back then, the people I knew were still singing Squidoo’s praises. I tried to warn them. It’s not difficult to see bad character for what it is. I likened it to The Lord of the Flies. But people get blinded by superficial “rewards” and “success.” “Oh, but I can get my lens on page 1 of Google so easily on Squidoo. Erika, you should try again at Squidoo.”

Oh, my friends, what good is page 1 of Google if you had to sell your soul to get there? Almost nobody listened to me. Well, what played out over the next two years was quite predictable. Squidoo kept abusing people, stealing their money, caring about nothing other than Google rankings … and God took care of it. They are toast. Gone. Sold to Hubpages. If you click through their website now, the few Squidoo survivors now have low-ranking pages on HubPages. And who knows how long that will last …

Think of Sodom and Gomorrah, my friends. Sometimes a person or situation is so corrupt that it’s easier for God to destroy it and start over than it is to transform it. So it is with these bullies and sociopaths. Mark my words.

3. The annihilation of PUAHate. What a horrific website this was, and there did not seem to be any hope of shutting it down. Many had tried to sue them and failed. This hate website went after me very personally and after a lot of other people too. It was one of the most painful sites on the internet, full of abuse and bullying. Finally, I began to tap about it. I tapped for it to be gone.

Well, again what happened was pretty predictable. That kind of venom and hatred among men who have no grounding in reality is a recipe for disaster. This past year, one of their members lost it and went on a shooting spree. The once-popular website for sociopaths no longer exists:

Think of Sodom and Gomorrah. These two cities were rife with violence, torture, and avarice. Until the day they were consumed by fire and brimstone. Sometimes a situation is so hopelessly corrupt that God uses extreme measures to eradicate it.

4. The disappearance of all my debt.

When I quit my job 3.5 years ago, I had a $200K mortgage. A couple years ago, I realized that having debt was like running on a hamster wheel all the time. I lived in a constant low level of fear, never sure if I’d be able to make the payments … So I asked God and the Angels for help, and hundreds of thousands of dollars flowed in to me. Debt is gone.

5. The disappearance of health problems.

I’ve written about this extensively elsewhere, how you can heal yourself and loved ones with the power of prayer healing strength. So I won’t repeat it all here. Just suffice it to say, I’ve disappeared chronic pain, kidney failure, dental cavity, chronic diarrhea, urinary tract infection that didn’t respond to antibiotics … all the same way …

6. Disappearance of restrictions on one of my online accounts.

Last year, one of my accounts was unfairly restricted. I sent a strongly worded email. And I tap. I always tap. Tapping is like supercharged prayer. Lo and behold, my permissions were magically restored.

A few really powerful mantras you can use to neutralize the anti-Christ:

“Truth will correct all errors in my mind.”

“Let me recognize, this problem has been solved.”

“I will forgive, and this will disappear.”

“I have no need for this I want to see.”

“God still is Love, and this is not His Will.”

When you use the mantras with EFT tapping, they are all the more powerful.

I’m simply going to stand back, and watch them disappear.

In every situation, God’s Will be done. And we will see a new world arise, a world in which injustice no longer exists. Because we didn’t buy into the illusion we were powerless.

← How to Attract Money – After 6 Years of Appeals, Hans Finally Gets $18,000 in Injury Compensation Using My Free Videos ← From broke and helpless to purposeful and having decent money
We use cookies on this website. By continuing to use this site, you are consenting to cookies. We do not sell user or customer information, ever.Ok