People have been asking me when I would be writing Parts 2 and 3 of the Mark Manson aka Postmasculine series of articles (read Part 1 here). And honestly, I don’t want to write them. I want to resolve this with him. I’m not interested in going back and rehashing every painful detail of what happened. But that’s the thing. He won’t face it. He writes about courage, but he won’t face this. Mark Manson aka Postmasculine ridicules me, he dismisses me, he ignores me, and he pretends that he was “joking around” for six months about our relationship. But he won’t face it. And that is why I am writing these articles. I have offered to mediate this countless times, and at the beginning of offering it, I was even willing to pay all of the expenses.

The latest is that he blacklisted me from an organization where I had been accepted on my own merits. Yes, he is that much of a coward.

Ask yourself – does a man with a clear conscience refuse to enter into mediation with a woman he supposedly loved? Does a man with courage refuse to mediate when the situation has obviously had a profoundly negative impact on the life of the other person?

Or does a man refuse to mediate when his conscience is NOT clear and he can’t and won’t face himself and the situation he created?

Does a man threaten a woman for telling the truth about a situation and publishes the correspondence if he has a clear conscience and the courage to face things? 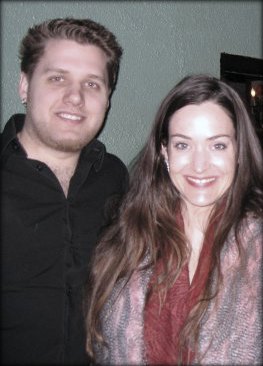 Mark Manson and Erika Awakening together in happier times

So today, before we begin at the beginning to show how Mark Manson aka Postmasculine persuaded me to have sex with him under the pretense of a long-term relationship, we are going to fast-forward to the beginning of the end of the relationship. This is what I will call the “EPIC FAIL” email. Mark Manson aka Postmasculine sent me this email on March 10, 2009. As I mentioned in the previous article, for the first five months of our relationship, everything was going beautifully. We were already talking about him moving to San Francisco. And mind you, during this entire five months of courting me, Mark Manson aka Postmasculine had NEVER set me aside for his “girlfriend.” We spent five days together in Los Angeles 24/7, and if he ever called her even once during that time, I never saw it. And recall, he had told me they were not going to be together and that she was moving to Africa. During this entire five months of courting me from October to March, he was always emotionally available to me, and I had come to trust him completely.

Wow, was I ever blindsided when he suddenly DISAPPEARED for his birthday weekend. Vanished. Would not answer text messages. Emotionally disconnected. Gone.

Obviously, I was frustrated by this and expressed this to him. When he finally re-emerged days later, he sent me this email:

I understand you’re feeling so vulnerable and frustrated recently. I feel responsible. I’ve been very engaged both emotionally and physically in other directions recently. The last 4-5 days have been intense and I feel like I’ve been a bit absent in our connection and that’s what you’re feeling.

I’m hoping to re-engage with you here by being open about this. I feel in a tight spot right now, emotionally. On the one hand, I’m trying to not let my connection with you dwindle while simultaneously honoring and being present with my girlfriend. I totally understand why people don’t have two primaries now. It’s fucking draining.

At the same time, I don’t want to put you in the awkward position of feeling like you’re “waiting” for me.

Logistically, this whole thing sucks. I just wanted to throw this all out there so you know that you’re not feeling this in a vacuum. I don’t know what’s happening or what’s going to happen. Part of me is saying, “Well, I’ll see her in two weeks and everything will be fine,” but that’s exactly what I used to say for a year and a half in a long-distance relationship and it sucked. It was torture emotionally for both of us.

When I do get to town, I think you and I should sit down and figure a lot of things out. I know you’re not so big on “planning ahead,” and while I agree we shouldn’t set our expectations too much, I think we seriously need to manage our logistical situation so we know how to navigate emotionally together. If that makes any sense.

Oh, you’re texting me again, so I’m just going to send this.

Now, I have a few things to say about this email. You can imagine my response when I received it.

Excuse me Mark Manson aka Postmasculine … You need to be “present” with your “girlfriend”? Are you fucking kidding me? For five months when it was soooooo very important to get me into bed and have sex with me, your girlfriend was NEVER an issue. You never once disconnected from me to “be present with your girlfriend.” And if you had, I never would have gotten involved with you. She is moving to Africa, and you told me you were not going to stay together. So how the fuck are you in a “tight spot” here?

And what the fuck is this about a 1.5 year long distance relationship that you never mentioned before? Why the fuck are you comparing me to this when we have been planning you moving to San Francisco for us to be together.

The last part of the email, Mark Manson aka Postmasculine was absolutely right about that. We did need to figure it out. But that’s not what he did. Instead, he back-pedaled on everything we had planned together, supposedly for this “girlfriend” who was moving to Africa. The “girlfriend” who had never been an issue in our relationship before this. What a load of BULLSHIT.

We broke up two weeks later when he came to visit me in San Francisco. He likes to claim that we were not communicating well, and that’s why we broke up. What a load of fucking BULLSHIT. Are you ever honest with yourself, Mark Manson aka Postmasculine? We broke up because you had reneged on everything you offered me and promised me.

And in the weeks that ensued, Mark Manson aka Postmasculine could not seem to figure out why I was upset about this EPIC BAIT AND SWITCH. When he knew full well from the beginning that I did not want casual sex, when he had wildly gone out of his way to induce me to be emotionally vulnerable and fall in love with him.

He STILL can’t seem to figure out why I’m writing about this, why I have requested mediation over and over again, and why I want this healed. After it all happened, he was more concerned about me removing him from my blogroll than he was concerned for my well-being.

This is not a man with courage, folks. Mark Manson is not a man who has any business teaching courage to anyone. This is a COWARD who cannot and will not face his life. That is why he avoids me. That is why he runs, traveling incessantly. The only way he can emotionally manage his unclear conscience about what he did to me is to dissociate and avoid his own feelings. And that is why he is running from America.

← Mark Manson (formerly PostMasculine), Sexual Fraud, and What Is This About Courage? ← Five Reasons Why Monogamy Is An Absolute Bar to World Peace