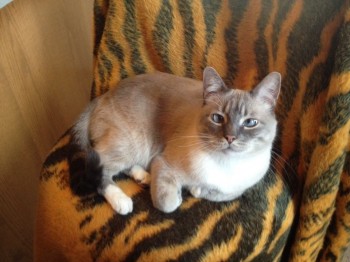 Find lost cat, find lost dog – can I find my pet with telepathic animal communication? If you’ve ever lost a beloved pet, you can probably relate to how devastating it can be … Grieving lost pet can be one of the most difficult experiences of our lives.

Grieving the loss of a pet can be as devastating as losing a family member or a dear friend.

Have you ever asked yourself this question: what if you never had to lose anyone or anything ever again? How do I find my pet?

Today I’m going to do something that I almost never do on this blog: I’m going to share one of my ultra-powerful EFT tapping scripts. We just had a miracle in my family, and I want to share with you an example of just how powerful What Is Holistic Belief Reprogramming? can be …

As you know from my recent articles, I spent last week in Tahoe. My brother is currently unemployed. He needed money, and I needed help with the house, so I figured it would be a great win/win deal for me to pay him to help me repaint the interior of the house.

My brother agreed, and he drove down with my dad from Oregon, where he lives. As always, he brought his two beloved cats. He loves them so much that he doesn’t really like to travel without them.

We were actually having a pretty great week. I keep my cats indoors. But my brother was letting his kitties go outside. This seemed to be fine until late in the week when my brother let his cat go outside close to midnight.

The next day, my brother’s cat had not returned. Perhaps this doesn’t seem like such a big deal, but please understand that Tahoe is not like most neighborhoods. Nobody lets their pets out unattended in the winter. There’s eight feet of snow on the ground, not much to hunt, snow plows coming by regularly, and coyotes prowling at night. We also have bears in the neighborhood. The weather conditions are extreme, with temperatures well below freezing and storms that can arrive without any notice. This is not a good place to lose your pet.

How Am I Going to Find My Pet? Don’t Give Up – Find Lost Pets with EFT Tapping

I could tell that my brother was starting to worry, even that first day. Overnight temperatures had dropped way below freezing, and it was not usual for his cat to disappear for such a long time in a strange place. By nightfall, I was starting to worry also. How are we going to find lost cat?

Things got worse that second night, when we had an unexpected storm that dropped eight inches of snow overnight, and in the morning there was still no sign of my brother’s lost cat. No little kitty paw tracks outside the doors. Due to the depth of the snow, it would be difficult for a little guy like my brother’s lost cat to move around much. We worried that our lost cat could be trapped in someone’s garage or hunkered down far away with no chance of getting back.

After we went out looking for my brother’s lost cat, we saw what looked like coyote tracks all over the greenbelt behind my house. Things were looking bleak. We were losing hope about finding our lost pet. How are we going to find lost cat now? 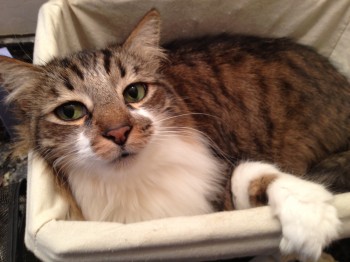 I almost lost Fritz the Cat to kidney failure and EFT tapping saved the day that time too :)

The truth is, I started to get really stressed about it. I was absolutely horrified at the idea that my brother would lose his beloved kitty when he was trying to help me out with my house. A lot of grief was coming to the surface for me, not unlike any situation where we face the loss of a loved one.

I reached out to two of my healer friends, who both provided wonderful support and release for me. But still my brother’s lost cat had not returned.

It was time for me to drive back to San Francisco, and I left my brother in Tahoe with my prayers.

On the drive back home, and after my return, I continued to tap for my brother’s lost cat, releasing layer upon layer of grief.

A third night passed. Still no word from my brother, still no sign of his lost pet.

The grief I was experiencing reached a crescendo this morning, so I tapped intensely after I woke up, and I cried and cried. I knew a miracle was possible, because I’ve had so many of them, but I was so scared we would run out of time before my brother had to go home to Oregon, and that it would be too late to find his lost cat.

And then I remembered these words from A Course in Miracles, including one quotation that opened straight up when I returned home last night:

“There is no false appearance but will fade, if you request a miracle instead.”

I was so scared that my brother’s lost cat was already dead. I reminded myself that death is not real.

And this is how I tapped (as I cried and released tons of grief from my system):

A few minutes after I finished this EFT tapping script, after his cat had been lost for three days, in the middle of Tahoe wilderness in a snowstorm, I got this text message from my brother:

So you see, we found lost pet. We found lost cat. And you can too. Don’t give up hope. Pray for a miracle with EFT tapping.

How did my brother find his cat? I believe that the EFT tapping created telepathic animal communication between my brother and his cat. I say this because I have seen EFT tapping establish telepathic communication many, many times. EFT tapping connects us to the Mind of God where all minds are connected. At least that’s what I believe, and I’ve seen a lot of evidence that it’s true. It happens very frequently when I tap about a conflict or issue with a particular person that the person contacts me during the EFT tapping or shortly thereafter.

So when you learn this advanced EFT tapping method, you can find your pet by establishing telepathic animal communication. You may receive better intuitions about where to look for your pet. Or your cat or dog may find their way home because they hear you calling. Find lost cat, find lost dog. We all deserve miracles, and it’s high time we received them :)

← Simplify, simplify, simplify … ← Feral Cat Rescue
We use cookies on this website. By continuing to use this site, you are consenting to cookies. We do not sell user or customer information, ever.Ok