What My Father Taught Me: The Frame We Choose In that Split Second Can Change Everything 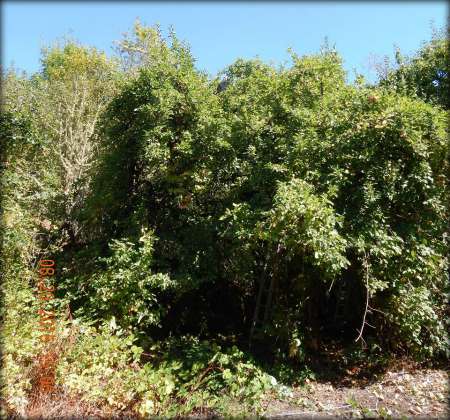 If you look very carefully at this photograph, you can see my father’s head near the crown of the tree. At an age when many men sit around watching TV, my dad climbs trees and picks apples :)

“Every great mistake has a halfway moment, a split second when it can be recalled and perhaps remedied.”

Those of you who know me, know I am not much of a pop culture buff. What my father taught me about television is that it’s not really worth watching lol. Every so often though, the concept of a classic movie captures me. And so in the waiting room of the veterinarian a month ago, I thought of the movie Sliding Doors.

If you haven’t seen the movie Sliding Doors, the premise is very simple. The movie shows us two entirely different scripts for the same female character. In one version of the story, she catches her subway train and gets home on time. In the other version of the story, the sliding doors of the train close in her face, and she misses the train. The outcome of her life is entirely different depending whether she makes the train or not. Another way of thinking of this concept is parallel universes.

I was sitting in the reception room of the vet, waiting for my turn to go back to the hospital to visit Harvey the Cat. As I shared in our last blog post, Harvey the Cat had experienced some catastrophic health problems. And the first few vets I saw all recommended immediate euthanasia. I actually had to tell them that I would no longer be attending appointments if we were going to be talking about euthanasia.

As I sat there, feeling very scared still about Harvey the Cat’s health … I saw a tall blonde woman emerge from one of the examination rooms. She had no pet in her arms, and she was crying her eyes out. She went to the reception desk and nearly collapsed with grief. She had to hold on to the counter to keep herself stable.

“May I help you?” asked the sweet woman at the front desk.

The tall blonde woman grimaced, and could barely get the words out. “I need to check out.”

Checking out with no pet in her arms. I knew what that meant. As she tried to give the receptionist her information, she doubled over with grief. I barely suppressed the urge to go over to her and hold her in my arms. Instead I asked the angels to surround her with love and light. And at that moment, she straightened up a bit. Perhaps some kind of positive thought came to her mind.

I knew what she was doing. She was paying the $245 euthanasia fee after killing her pet. The same fee they would have charged me.

Sliding doors. She was in exactly the same place I would have been, had I listened to the horrible things the veterinarians had all told me when Harvey first got paralyzed. She left the vet still crying. And I would imagine that she is still stricken with grief all these weeks later. I still feel sad for her.

Some people say that time heals all wounds. I don’t really believe that is true. My Facebook News Feed is full on a daily basis of posts from people who are still mourning losses from decades ago.

Ah, but it’s so much easier if we do not make the mistake in the first place … which leads us to today’s story about what my father taught me … about split-second life or death decisions. 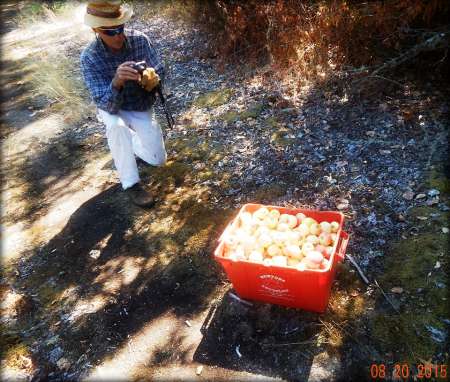 My dad looking spry with his motherlode of apples destined for hard cider.

You would love my dad. Everyone does. At an age when most men are barely getting around anymore, my dad is traveling the world, climbing mountains, and scaling fruit trees to toss apples down to my brother.

For years in my 15-Week Miracle Coaching program, I have been teaching the art of re-framing. I have taught people how they can turn their whole life around by changing the way they perceive situations.

Right before I left for the Middle East, my dad was visiting me in Tahoe. And he told me a story about his youth that drives home in the most powerful way how utterly important our interpretations are.

What my father taught me with this story is that, even in the most devastating-seeming circumstances, we still have a choice about what is going to happen to us. That choice depends on us being non-reactive, centered, present, and willing to see the interpretation that will help us … rather than hurt us.

My father was hitch-hiking back in his youth. This was before he married my mother. If the story had turned out differently, I would not be here now.

Two men stopped their car by the side of the road, and picked my dad up. My dad said they had been driving for maybe 20 minutes when the man in the front passenger seat turned around and pointed a gun straight at my dad’s face. My dad was staring into the barrel of a gun.

Yeah, take a deep breath and imagine yourself in that situation, staring down the barrel of a gun in a car moving at high speed down the freeway. What would you have done?

If my father had panicked, and chosen the wrong interpretation … it is very likely that I would not be here now.

Instead, somehow, my father must have reached deep into his core … and he said casually “Hey, isn’t that a .36?”

My father said the man turned the gun sideways, looked at it more closely, and said, “Yea, I think it is a .36.”

Then they started talking about guns. The drive continued without incident, and my dad was dropped off safely at his destination. After which, he became my father.

When I look back on my life, I see many times that I had a split-second decision to make. Everything depended on how powerfully I could hold my frame. I can see that I avoided being raped several times by exercising this level of presence.

And I can also see many times in my life, that I look at with regret, when I made the wrong choice and lost something that was precious to me.

When I sat in that examination room two months ago, being pressured to kill my cat, I had a choice. I could accept the devastating frame that was being offered to me, and I could become that devastated tall, blonde woman in the reception area.

Or I could choose another interpretation. I could explore the possibility that this situation had been given to me by God not for death and devastation, but for empowerment and Life.

I could explore the possibility that I was not meant to kill my cat, but rather to heal him. And I chose Life.

I chose life even though it meant spending $6000 instead of $245. Could any amount of money compensate that woman for her grief?

I chose life even though it meant barely sleeping for the next two months. Would I have slept “better” after losing my cat? I doubt it.

I chose life even though a whole series of veterinarians gave me no reason to hope.

I put my faith in God, and I chose life.

Sometimes everything turns on how much presence we can muster in a split second of time. It may be one of the most valuable lessons my father ever taught me.

← Travel for Transformation: Opening A Portal in the West Bank ← Celebrating 111 Days of Love – Join Now
We use cookies on this website. By continuing to use this site, you are consenting to cookies. We do not sell user or customer information, ever.Ok