Learn How to Surf in Costa Rica 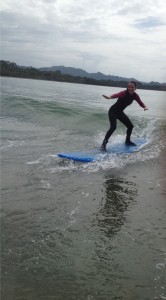 Just so you don’t get the wrong idea, I was the kid who got picked last for the team. Yep, throughout grade school, I was always the last one. I had skipped a grade early on, so I was younger and smaller than the other kids. And my parents did not understand the importance of athletics for raising a well-rounded kid. I say all this not so you will feel sorry for me, lol … it’s so you will realize that just because you had a slow start in life, that does not mean you cannot achieve your full potential NOW.

Whenever we buy in to our limiting beliefs like “You have to learn as a child to be any good at this,” we are putting ourselves in a prison of our own making. As it turned out, this clumsy non-athletic Erika Awakening started gymnastics as a teenager even though it was “too late” because most gymnasts learn from the age of three or four years old. Within a couple of years, I was able to do five back handsprings in a row. And the process of learning to overcome fear that I invented to let go of my fear of flipping backwards has served me in many areas of my life since then.

Later, I took the same skills and learned how to ski as an adult. Now I can ski most of the ultra black diamonds at Squaw Valley U.S.A. Once again, I learned that extreme sports are about ninety percent inner game. It’s all in your mindset, and fear is NOT your friend (learn how to Become Fearless here).

I had my first surf lesson EVER yesterday with the amazing Hershel Lewis from Caribbean Surf School in beautiful Puerto Viejo de Talamanca in Costa Rica. He only spent about five minutes on dry land explaining to me what to do. Part of it is easy, lol, lying on the board. The “hard” part is standing up and riding the wave. What I learned years ago from gymnastics is that most of athletics is mental. It’s you and your fear, and that’s about 90 percent of the game. So I learned in gymnastics ways to “trick” my mind into feeling comfortable doing something new by bridging to something I could already do.

So … I got up and surfed on the FIRST wave. Yes, I did. The little girl who always got picked LAST for every team in grade school now gets called “athletic” and “a natural” by coaches in a lot of different sports. Let’s be honest … part of that is a tribute to how effective Hershel Lewis is as a teacher. And part of it is a tribute to the power of my system of Holistic Belief Reprogramming – in other words, having the right mindset. The right mindset is “I’m the Holy Son of God Himself, I created all this so I could play in it … this is going to be easy.” Lol ;-P 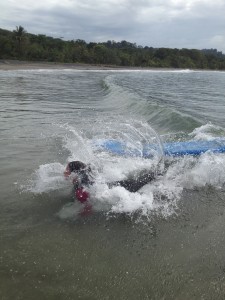 Now, as the day went on, I did start to get a little fatigued and less graceful. You can see the results here. Hey, part of Becoming Fearless is not being scared to push the edges and fall down from time to time. Plus … that just gives me more material for the EFT tapping videos. Clearly, we need one for ENDURANCE lol.

In the next post, I will share with you about Overcoming Fear of Traveling Alone and Making New Friends, how I feel fearless while traveling alone and how I went from eating alone to a gregarious table of five in just one day :) 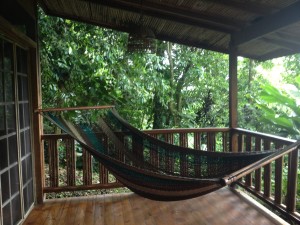 Get the 30-Day Becoming Fearless Challenge now on pre-sale before the price goes up … 30 powerful EFT tapping videos for releasing every kind of fear, including social fears, physical fears, sexual fears, fears of being vulnerable, and the list goes on and on … :) Get it now HERE.

← Getting to Costa Rica and Out of Our Comfort Zone ← Becoming Fearless in Your Social Life
We use cookies on this website. By continuing to use this site, you are consenting to cookies. We do not sell user or customer information, ever.Ok