Fritz the awesome cat needs a miracle of healing: Kidney failure and where to go next 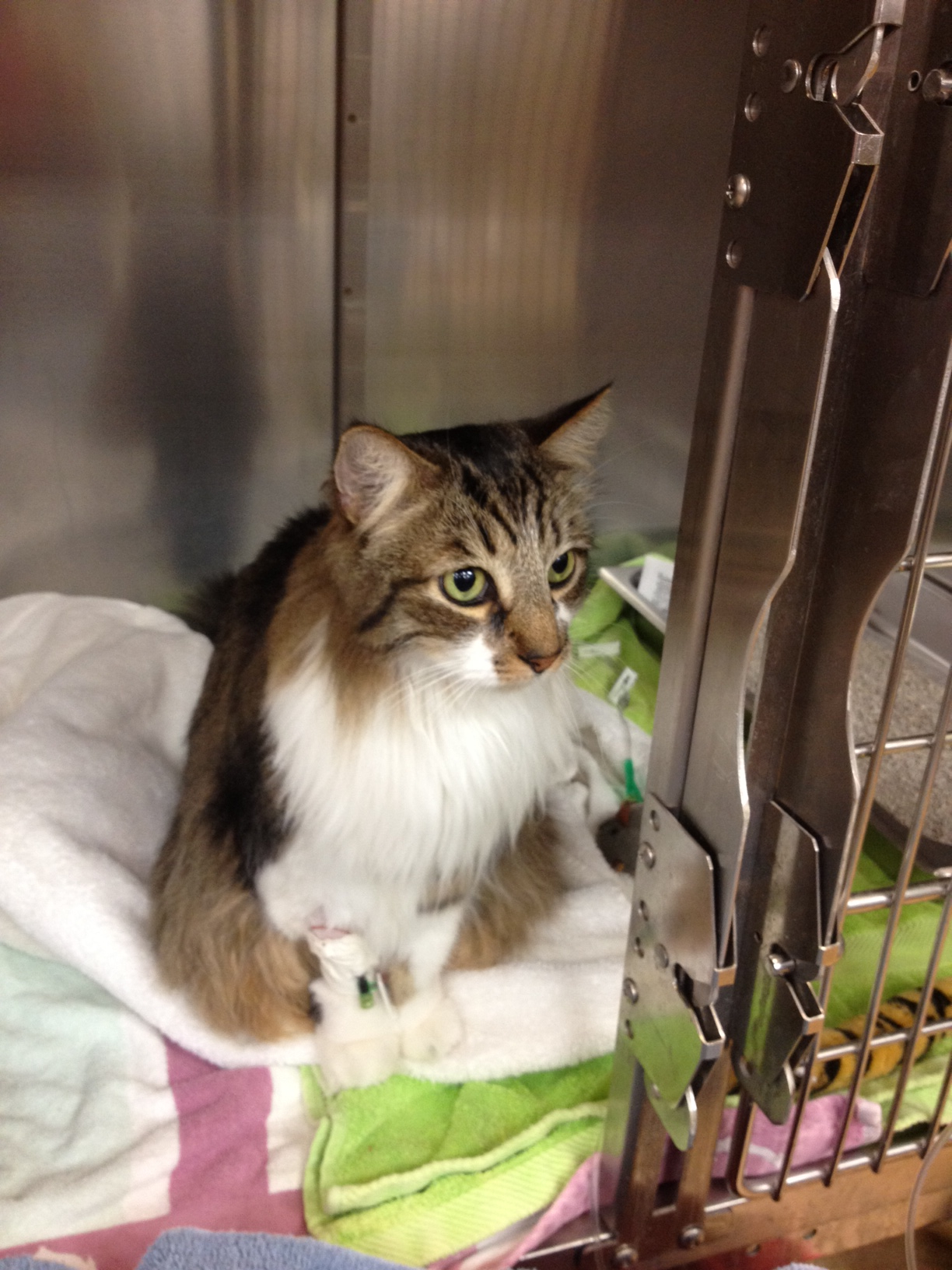 Needing A Miracle of Healing for Feline Renal Failure

Fritz the Cat in the hospital. He needs a miracle of healing for severe feline renal failure.

Here are two words you do not want to hear about your beloved pet: Feline Kidney Failure

Fritz is an amazing cat in so many ways. I could blog for months about his wonderful stories. So you can imagine how devastating it was to hear those words: Kidney failure.

Kidney failure. That’s what unexpectedly happened to us this week. On Sunday, Fritz the cat was his usual energetic self. Waking me up in the morning by making loud noises and licking me incessantly to get his breakfast. Jumping seven feet in the air to the highest place in the apartment and evicting my other cat from the perch.

On Monday, he started vomiting and I just did not have a good feeling about it. I took him to the local cat clinic, where they ran tests. They gave him subcutaneous fluids, and he seemed to be on the upswing. He was eating again and seemed happy. However, by Tuesday night, he was really lethargic. I got the voicemail indicating he had significant kidney abnormalities. I took him to the emergency cat clinic. And he has been there ever since.

So We Need A Miracle of Healing, Big Time

I can’t even tell you how lonely it has felt in this apartment with just me and my other very quiet cat Harvey. We didn’t even realize how huge Fritz’s presence is until he was not here. It just was not the same without him, and I knew we somehow had to get him back.

When they told me the diagnosis of kidney failure, I was devastated. It sounded ominous and horrible, like a death sentence. I’ve been coming to terms with it ever since. We have not been able to identify any physical cause, and he is only eight years old, which makes it all the more bewildering. To make things more complicated, the vet bills are huge, and my business slowed way down while I was distracted with all of this.

As you can probably imagine, it has been a very emotionally intense week since he was admitted to the hospital. I have been moving through a lot of grief and fear and guilt about being a “bad mother.” And doing a lot of EFT tapping for him. Things seemed to be brightening by Thursday, when Fritz appeared to have a lot more energy, was eating well, and was very affectionate with me. 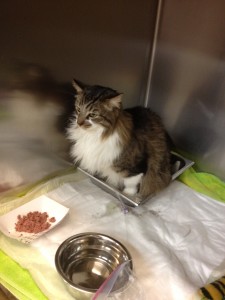 Fritz very excited to see me show up, immediately demonstrates his happiness by using his litter box instead of peeing on his sheets :)

Fritz is coming home tomorrow. We had an amazingly beautiful day today. I spent most of the day at the hospital. He was so happy to see me. I got as much of my body into his cage as I could and cuddled with him, gave him Reiki energy, and just loved him. I had been EFT tapping through a lot of motherhood guilt issues, of course regretting every single thing I’ve ever done and wondering if this could have been prevented. As I lay with him in the cage though, and after he had received a bunch of Reiki energy, I suddenly had the thought for the first time, “I am a good mother.” It wasn’t a minute later that he started grooming himself for the first time since he has been in the hospital. Tears of happiness came to my eyes seeing him have enough energy and feeling good enough to groom himself. I had no idea something so small could make me so happy.

I don’t think any of this is happening by accident. I think it’s happening for a reason, and that Fritz is about to play a significant role in the healing of this planet. Toward the end of my visit with Fritz today, I suddenly noticed that the newspaper lining his litter box had a headline “Spiritual awakening.” I said to Fritz, “Yep, Fritz, that’s what this is. This is your near-death experience like I had a few years ago. It’s really a spiritual awakening.”

And with that, Fritz got up and sat in the litter box and took the LONGEST piss that I think I have ever seen. Lol. Christening our spiritual awakening litter box. For those who are familiar with energy healing, people tend to urinate a lot more after receiving Reiki or other powerful healing. This is because they are releasing toxins out of their system. After Fritz comes home, I will give him daily Reiki whenever I feel called to give it, to help support the release of toxins out of his body and promote his healing. 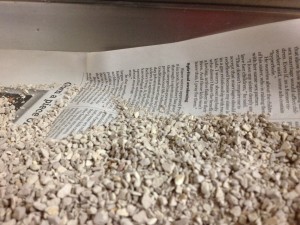 Tonight after coming home from seeing Fritz at the hospital, I feel this amazing heart-opening love, and I’m excited and (and a little nervous) for him to come home tomorrow. Nervous because he now will require some really good care, like subcutaneous fluids every day, and it’s all up to me to provide this. And I will simply have to find a way to keep my business going and bring money in while focusing intensely on getting him healed.

The “official” prognosis for Fritz is not very good. According to medical science, kidney damage is permanent and cannot be repaired. Officially, they may only give him a few months or a year or so to live.

I am not willing to accept the “official” prognosis. I believe Fritz really wants to be a star. That’s why he started appearing in my EFT tapping videos and had such a great personality that all my customers love him. What I told him today is that I am going to do everything I can to help him be the Miracle Cat who defies the odds. And I promised that I would write about his story on my blog so that people could follow our progress with our miracle. I’m already starting to read up about kidneys so that I will know which limiting beliefs to target in our EFT tapping to get him a miracle.

I am not going to give up on Fritz. He has a strong will to live, and to be happy here with me and Harvey, and to be a star. I am going to love him back to health as best I can, as I did with my other cat a few years ago. I hope you won’t give up on him either. He deserves to receive this miracle, and I am going to do everything I can to give it to him.

We would deeply appreciate it if you would support Fritz in your prayers and join in my intention for a full and complete recovery for him. We need a miracle of healing. Thank you.

Update August 2014: We got a miracle of healing! Thank you so much for your prayers of healing. Prayer healing strength really does change outcomes.

To learn how to heal your health yourself, check these articles:

Prayer Healing Strength: A Compilation of Articles About Miracles of Healing

Thank you God and Angels for our wonderful miracle of healing.

← “Brother, there is no death” – EFT Tapping for Miracles of Healing ← Fritz the Cat Miracles of Healing Continue!
We use cookies on this website. By continuing to use this site, you are consenting to cookies. We do not sell user or customer information, ever.Ok